The Azodin Blitz 3 is a lightweight paintmall marker gun that is making waves all over the country. It features a screw-lock feedneck, new compact regulator, and aggressive milling. It has a sensitive trigger and is expected to outperform it’s predecesor. This post is intended to inform paintball fans, so they can make an educated purchase if they are considering the Azodin Blitz 3. With this paintball gun, you will get a lot of marker for a low price. 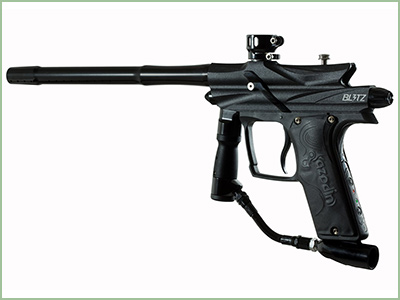 The Azodin Blitz is a user-friendly paintball marker that is truly lightweight: it is about 2 pounds, has a streamline design, and is operated by compressed air. Available in 5 different color combinations, it is suitable for beginners and more advanced users. It is moderately priced and can be purchased for roughly $150 online. It has an 11 stock barrel, and fires .68 caliber markers. The Blitz features 4 preset modes (semi auto, psp, ramp, and full auto) that can be changed by holding down the button and scanning to a separate mode. It operates on a 9 volt battery, and is 18.9 inches long with an autococker thread.

The Azodin Blitz 3 is a good beginner marker. There are many rave reviews that have been written by new users, and it is considered an excellent ‘first’ paintball marker for the price. It can be operated out of the box, with little to no issues reported about its’ performance.

The Azodin Blitz 3 is a straight, accurate shot with an average noise level. The sound will likely startle you initially, as it is very loud, but paintball markers typically are on the louder side. Unfortunately, because of its noise level, other shooters will be able to pinpoint where you are on the field. Changing the barrell or the hopper have been reported to reduce the sound. Users have reported an extra sensitive, light, ‘hoppy’ trigger, so you can shoot pretty fast. It is accurate for long range shooting in fields, and is an excellent choice for beginners. There are adjustment points so you can tune the trigger to your liking.

Although it is an appropriate marker for those who are new to paintball, the Azodin Blitz 3 enables beginners to compete with more experienced users. In the semi-auto mode, you can fire it as quick as you can pull the trigger. With full-auto, the firing rate is about 10-15 rounds per second. If shooting on modes other than semi-auto, an electric hopper is recommended.

The electronic hopper can feed the paint in faster. It has a strong kick, and can make you go through lots of ammo in a short time due to it’s efficancy. You can expect accuracy from this marker up to 100 feet. With different settings being used, you can see it shoot as far as 150 feet with the same accuracy. The light weight of the marker combined with the curvature of the regulator and grip make it a very sleek, nice looking gun that will give the user an advantage over rental markers and inferior equipment so they can easily “run with the big boys” and gain a competitive edge.

It is recommmended to clean the eyes of the marker and lubricate the marker in entirety every time it is used, so the user doesn’t chop paint. It is compatible with both CO2 and HPA, and is suitable for different situations (wood ball or hyper/speed ball). The bolt is partially exposed, so if it comes into contact with any material, it is highly recommended to clean it immediately. As long as you keep it clean, this marker should operate smoothly for months at a time with no major issues.

The Azodin Blitz 3 comes with marker, barrel, barrel cover, spare o rings, bolts and allen keys. It doesn’t come with a carrying case. The feed neck is screw-on, so you should not expect action that is as smooth as a quick-clamp feed neck. The hopper goes on easily and doesn’t hinder the performance of this gun. You can upgrade to an electronically-controlled hopper for better results and less paint chipping. Although the stock battery is adequate, if running out of power in the field is a concern for you, then an upgraded battery would be a good investment for this marker.

If you are looking for an attractive, lightweight, user-friendly marker, then the Azodin Blitz 3 is a superior choice. It is a versatile marker that is effective whether you are playing woods ball or speed ball. With it’s light weight at 2.03 pounds, shooters at all levels will be able to operate it with a breeze. The frame is made up of a nylon-reinforced composite. This is the stuff that helps make the gun so light. Even after rough play and drops, this marker is hard to damage. The only complaints that users reported was jamming, which was easily fixed with proper cleaning. For the cost of under $200, this is a superior choice for the price.