Dye M2 Paintball Gun Review: Is It Worth Buying?

One of the best and most popular ways to participate in paintball games is with a new gun known as the Dye M2. This new, lightweight, electronic machine is among the best on the market for paintball guns and is sure to impress your friends and foes when using it. The Dye M2 ranks among the best paintball guns in the world, and we endorse buying it and seeing for yourself how fun and capable it is in the context of using it for paintball matches and tournaments of all kinds.

Quick Navigation
What Is a Dye M2?
How It Compares
Conclusion

The Dye M2 is made of lightweight aluminum. This makes it easy to carry for matches (the Dye M2 weighs just over one pound), and durable for long periods of time thanks to the sturdy nature of this particular metal. The battery is rechargeable through a USB port and can provide about 100,000 shots when fully charged. It has a low profile, which makes it great for competitive play, and best of all, it features a screen that gives you performance data so you can track your performance over time.

We picked a few similar products available on the market to see how they compare.

The Dye M2 is among the easiest paintball guns on the market to use, with its screen providing you with data so you can improve your performance and a high degree of accuracy in its aim. The grips are sticky and the gun is lightweight, so it is easy to use, and the gun fires silently so you have the advantage of surprise in tournaments and other forms of competitive matches. The system the Dye M2 uses allows for it to fire forcefully and with less pressure, so there is very little recoil and shooting the Dye M2 gun is more fun and accurate for the user of the gun.

The shooting power of the Dye M2 is very strong thanks to a strong gas efficiency, also a major factor in allowing the gun to shoot quickly and silently. You do not even need to upgrade the barrel thanks to the strength of the momentum for the paintballs.

The design quality of the Dye M2 is terrific, with a silent firing system that allows you to get a leg up on your opponents, a variety of colors available for the user to choose from depending on their preferences, and a lightweight design with very little recoil that allows for you to take full advantage of the gun's power. The screen is a major factor, and the joystick allows you to shift quickly through the potential modes that the Dye M2 offers.

The warranty for the Dye M2 covers the gun for one year after purchase and all issues. It is very rarely used since bugs are extremely rare. 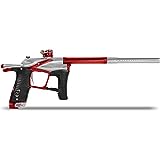 The Planet Eclipse EGO LV1.5 is an attempt for the Planet Eclipse line to aim for a lower price point with their brand of paintball guns. This results in a gun made of slightly less expensive materials while retaining the same high quality that characterizes their more overtly fancy brands of paintball guns. It comes in numerous shades and colors.

The Planet Eclipse EGO LV1.5 is available for about $995 on Amazon.

The Planet Eclipse EGO LV1.5 is very smooth in the hands and is lightweight, weighing around 2 pounds and featuring a nylon construction with an aluminum barrel. The gun is a smooth shooter, but it has a noticeable amount of kickback that might frighten away the less experienced paintball users in this field. It can also be a bit louder than usual, which may result in a stealth based strategy being less effective for the user of this brand of gun.

The shooting power of the Planet Eclipse EGO LV1.5 is its main asset. It shoots in an extremely accurate fashion despite the noise and kickback, and the gun fires off shots at a fast pace if the user chooses to play that way.

Some people are less fond of the decision to have the Planet Eclipse EGO LV1.5 be constructed primarily out of plastic rather than metal, but the smooth handles and sturdiness of the final product generally will nix the naysayers' opinions on this matter. It is a gun that requires a very low amount of maintenance, and the quality of the gun is generally tough and strong enough to last in any number of matches without having to worry about it falling apart suddenly.

The Planet Eclipse EGO LV1.5 has a warranty that covers everything for within a year of purchase.

The Spyder Fenix gun promotes itself on the back of its efficiency, allowing you to fire about 1600 balls of paint using only 20 ounces of carbon dioxide when loading it up. This system that the company has specialized for this particular paintball gun is called the EKO Valve system, and it is designed to help paintball players save money by allowing them to fire more paint while purchasing less carbon dioxide in the process.

The Spyder Fenix only weighs around two pounds, making it a lightweight option, and because it uses so little air to fire the projectiles, there is very little noise when the gun is being fired. The main issue, however, is that it is not a particularly accurate paint gun and you would need to fire many paintball shots in order to get hits on your fellow players. It also requires less maintenance from the user.

The strong shooting power of the Spyder Fenix while the EKO Valve system ensures that very little carbon dioxide is used in the process ensures that your shots will be hard and fast when using the gun for matches. The accuracy is potentially a worthwhile sacrifice, depending on your gameplay style.

While the poor quality of the gun's aim is an issue, the Spyder Fenix also requires very little maintenance when it is being used, and the shiny and black design is attractive and will go well with almost anything.

The Spyder Fenix warranty covers any potential issues for up to one year after purchase. 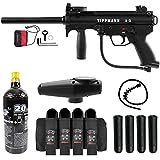 The MAddog Tippmann A5 A-5 gun is part of the fairly similar Tippmann line of paintball guns, which are all fairly similar in terms of features and design outside of a few cosmetic changes. The new version is designed to be easier to maintain and use than past versions, and the new features include a faster switch from safety mode to various shooting moods, and a clearer sightline.

The MAddog Tippmann A5 A-5 is designed to be fairly easy to use and is a line generally oriented towards beginners. It comes with a protective mask and chest guards to ensure less pain from getting shot, and the goal of this latest update is to ensure less maintenance, an easier gun to carry, and less need to reload in terms of carbon dioxide or paintballs. The gun weighs about 2 pounds and is made of nylon, making it a fairly easy carry and fairly sturdy.

The MAddog Tippmann A5 A-5 has a fairly strong shooting power, although since it is ultimately a learner paintball gun, it is not the strongest gun on the market. The barrel can be taken off for cleaning, which makes it easier to maintain but also ensures there is less power behind the shots.

While plastic paintball guns tend to be less durable than metal ones in the eyes of serious paintball fans, the fact that this gun is made of nylon is a worthy replacement to the standard material that makes up guns like this one. The grips are soft and easy to hold onto, and the light weight of the gun results in it being easy to carry and fire. It also has minimal kickback and does not make too much noise when being fired.

The MAddog Tippmann A5 A-5 has a warranty that will cover any problems within a year of the gun being purchased.

While all four of the paintball guns we looked at had their pros and cons, we ultimately maintain that the Dye M2 is the best paintball gun on the market for the average buyer, with the price being the only negating factor for some.

The MAddog Tippmann A5 A-5 is too much of a beginner's gun, and the potential problems of a less strong firing strength could put the player at a disadvantage.

The Planet Eclipse EGO LV1.5 has plenty of assets of its own, but the kickback, noisiness of the firing and the high price will probably disqualify it for many users.

The Spyder Fenix is terrific for anyone looking to save money, but the inaccuracy of its firing capabilities will put you at a potential disadvantage unless you know how to use it properly.

The Dye M2 is the clear winner in all respects except price: it is a highly accurate fire, it lasts a long time thanks to being made of metal, and it allows users of all skill levels to track their progress via the screen attached to the gun. It has a reputation as one of the best guns on the market, and it earns its reputation.