This article will review the Spyder MR1 paintball gun. The purpose of the article is to inform readers of the gun’s aspects and features, it’s abilities, how it feels when used, any possible maintenance, along with the price of the gun, what others feel about the Spyder MR1 and of course if should be the paintball gun for you. 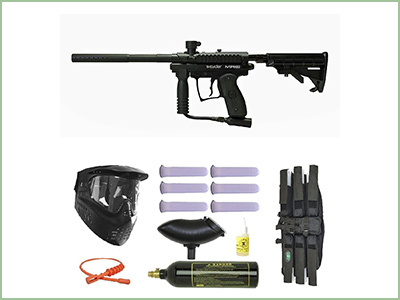 The Spyder MR1 paintball gun is a semi-automatic, military style paintball gun. With an all-aluminum body, the gun is compact, with a magazine-style front grip, a standard Picatinny rail for scopes and other attachments, removable shoulder stock, and a durable matte andonized finish. Weighing in at 3 pounds 1 ounce, it is lightweight with a barrel length of 12 inches and a marker length of 19.5. Also, the Spyder MR1 has a 68 caliber projectile along with being a gas blow back operating paintball gun.

As far as a beginner’s gun, this would be right down their alley. Easy to use, just pick up and go without any modifications needed. The gun is great for first-timers as there are no fancy attachments needed to really enhance the guns capabilities. The price of the gun can range from $90-$170 US depending on whether you buy just the gun, or the gun with a kit/set of equipment.

Like with any new product, how something feels when you use it is key in whether you want to purchase it or not. Being able to test out a new gun before using it would be nice all the time, but not always possible. The Spyder MR1 seems like a solid gun to use. It has the removable butt stock, so going from a medium-range weapon to close-quarters combat is easy to do. Usage during a paintball game is great, but it can be loud so it is not a tactical gun. Also, the tanks can overheat quickly and become useless. But if you put some time in with it, it can become your favorite first gun to use when going into a paintball game. This is especially true if you are a casual player or a beginner as this gun is easy to use and requires little time to get used too.

When shooting from the Spyder MR1, it can feel a bit powerful at the beginning. But once you put a few shots down, it becomes easier to handle overall. It’s a straight shot semi-automatic, but if you get into a quick trigger situation, it can become sporadic at time. It’s better to work up to a quick firing trigger as it takes time to get used to the recoil of the gun. A great medium-range weapon when used with the stock, it can go up to ranges of 200 feet with ease. Once you remove the shoulder stock though, it can become accurate at close range. This is especially nice in close quarter combat situations. The only problem is when you take off the stock, the longer range decreases dramatically without the support of your shoulder.

As far as the power of the gun goes for the Spyder MR1, it can be a tad overwhelming at the beginning. The overpowering nature though can be solved through a few options, one of which is just practice with it. Another could be order a customized stock to steady the gun against your shoulder. Once you get the feel of the gun down, it can be great for beginners. No fancy attachments needed, just load and go.

The Spyder MR1 is very easy to take apart, with only a few screws or buttons to remove to get to the guts of the gun. Assembly is a bit tricky, with a few tiny pieces that must be put back in the correct order in order for the gun to function properly without mishaps. As far as cleaning regularly, it is not necessarily a must need for the gun; it is very durable after usage, just occasional cleaning would suffice. The ammo that works best for this gun would be 68 caliber projectiles and not anything else.

While the Spyder MR1 as it comes is a very sturdy weapon to pick up and go; there are attachments that can make the weapon even better when used. Of course, already mentioned is the removable shoulder stock, which makes the gun accurate from medium range and effective in close quarters. A mechanical hopper allows the gun to fire at a faster rate than the stock option that comes with the gun. The waist pack is nice to have, but may take some time to get used to in game play. An optic is also an option with the rail on the top of the gun, but with the mask on, it can be difficult to accurately see targets through the scope.

The Spyder MR1 is a very solid weapon to use as a beginner in the paintball world. Compact, with numerous options to help out those new to the game, it is an inexpensive gun to just pick up and go out and play. A good, concise shot from medium range with the stock on with not too much recoil once you are used to the gun. Maintenance is easy for the gun, with minimum cleaning necessary or very often and assembly while tricky can be solved quickly. Overall, a gun that would be worth the purchase because of how cheap it is and how reliable it is.