The Planet Eclipse Ego LV1 poses as one of the high-end paintball guns designed to offer long-range shooting, and shoots conveniently. It is an upgrade of the earlier Eclipse model to bring the best of all worlds. It is one of the compact paintball guns that you can use all day without feeling the weight. Will go into details in the following sections of this Planet Eclipse Ego LV1 review.

It operates smoothly and quietly. One of the highlights of this gun is that, it generates less LPR pressure, giving it a low recoil and less noise when you are playing. Its bolt and rammer also produces less force, muffling the noise even more. It is a gun designed to offer performance and efficiency.

This article is a review of the features and performance of the Planet Eclipse Ego LV1. 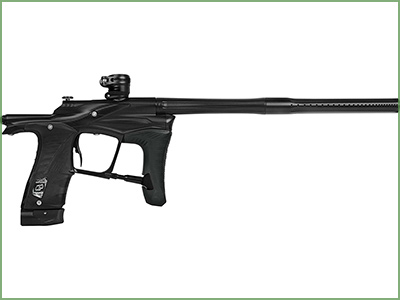 The Planet Eclipse Ego LV1 has been upgraded in design and, therefore, does not sport some of the common features on most Planet Eclipse guns. It features a unique lever valve mechanism, giving it a smooth operation and enhancing its shooting power. It is offered with both heavy and light Zick3 rammer with cure 5 bolt generating a small force for a smooth performance.

Unlike other markers, this is designed ready for use out-of-the-box. There are no connections needed before use. The unit is offered with a dwell/pr through which you can tune the performance of the gun. Even better, it features a strategically placed gas line, which does not interrupt with the gameplay.

The gun features a 5-inch shaft 4 barrel which is on the lower end. Even when the barrel is smaller than other models, it still allows you to shoot for a long time before reloading.

The gun weighs 2.06 pounds, which is way lighter than most guns on the market. This makes it feel light even after more than four hours of use. The Orion valve ensures a high flow, so, you can shoot up to 6 paintballs per second. To enhance the feel, the gun is offered with an adjustable LCD backlight.

The price of the Planet Eclipse Ego LV1 is on the high end. While this price is relatively high, the quality and the power of the gun are great.

The Planet Eclipse Ego LV1 generates smaller forces to match its small components. This makes it feel easy when you are shooting. Even with the small forces, the gun offers great power. It has a lower LPR pressure and a smoother profile of released air, which reduces kick and sound significantly.

The Planet Eclipse Ego LV1 offers 65-80psi range. To enhance shooting, the gun features 1-bit microprocessor, which gives up to 16 million instructions in one second. Its solenoid drive circuitry increases the velocity of the gun, so, you can shoot for long distances.

It features sensor trigger activation with ramp and semi-auto modes. This makes it easy to use and enhances the shot. It further features a dual trigger return that operates magnetically using a spring. This allows you to shoot repeatedly with ease. Shooting on this gun feels easy.

You can use sighting or scope to enhance the accuracy of the shots. With a good scope, tracking the target on this gun is easy.

The Planet Eclipse Ego LV1 has a low recoil thanks to the low LPR pressure. This allows you to use it for a long period without ever feeling fatigued. The gun is easy to set up right out of the box with no need for tools. Even without any extra additions, the gun will still function great. The LCD display allows you to tune the settings of the gun to enhance the performance of the gun. You can interact with the readings with ease, giving you all the control you need.

Seeing that there are no connections needed, a beginner can easily use the gun. While it is not offered with iron sight, you can still use the gun to get accurate shots as a beginner. It might take a few weeks to train with no scope or sight, but the Planet Eclipse Ego LV1 is one of the most accurate guns. The price may, however, limit beginners who want to test waters.

Your gun needs to be kept in a dry place. While most of the parts do not rust, the bolt can rust and reduce the effectiveness of the gun. After use, wipe the barrel with a wet cloth to remove grime, oils and paint.

Use gun oil to lubricate the front and the rear bolts of the gun after a week. Oiling should be done when the gun is about to be stored for a long time, and before use after a long period of storing. Any attachments on the gun should be removed before maintenance work and before storage. Two drops of oil per part are enough. Any repairs and gas leaks should be handled by a professional.

However, the barrel of this gun is relatively small and only small-sized accessories fit. While the accessories are great, they increase the weight of the gun. When used to a light gun, the added accessories may make the gun feel a little out of balance.

There are different marker barrel colors to choose from. Besides the colors, the overall design of the gun looks great. It is a high-performance gun for everyday use. Even with a comparatively small barrel, you still shoot for a long period before reloading.

We recommend you also take a look at our Planet Eclipse Etek3 review for the sake of comparison.