In the world of paintball, having the right paintball gun is crucial. If you are in the market for a shorter and more lightweight paintball gun, you might want to consider checking out Kingman’s Spyder Victor. This semi-automatic paintball gun packs quite a punch and won’t put a huge dent in your wallet. So, why exactly should you buy this paintball gun? In this Spyder Victor review, we will go over its specs, how it performs, and what you will need to do to maximize its performance with regard to maintenance and accessories. 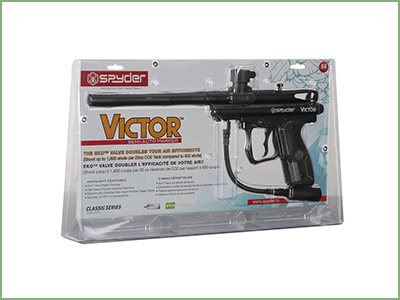 If you’re looking for a great starter paintball gun, the Spyder Victor has the right specs. The Spyder Victor is part of the Classic Series with its aluminum-only extruded body and sleek anodized matte finish. This .68 caliber paintball gun features an air-efficient EKO Valve that lets you shoot off up to 1,500 shots. These shots are fired from a 20-ounce CO2 tank. Additionally, the gun features a non-slip rubber grip panel, external velocity adjuster, and a steel braided hose line.

While the Spyder Victor works great for a scenario game or woodsball, it might not be best for speedball. However, its two-finger grip and high-impact polymer clamping feed neck provide a great performance and make the gun beginner-friendly. It also weighs in at a svelte 2 pounds, making it easy to carry while paintballing.

Since the Spyder Victor was reduced in weight and length, it is lightweight and easy to carry, hold, and shoot. It seems to be best-fitted for younger shooters who need something lightweight to start learning on, although it might seem a little bit too lightweight and rickety for experienced shooters. This gun gives off very little in the way of recoil, making it easy for beginners to shoot.

While standard markers will give you about 800 shots, you can get up to 1,500 shots with the Spyder Victor’s 20-ounce CO2 tank. Beginners and slower shooters can still get well over 1,000 shots off without a problem. Since this is a mechanical frame paintball gun, you won’t get as many shots off as you would on an electronic one. However, with a bit of practice, most shooters can get an average of 6 to 8 shots off per second. The Spyder Victor is not known for being the most accurate paintball gun, but for a low-end priced marker, it makes for a good practice gun.

While this is definitely a beginner’s gun, it can get some moderately accurate shots. After some practice, you can land a steady shot with Spyder Victor on an opponent who is about 40 feet away, maximum. However, the trigger pull can be a bit stiff, which will limit your firing rate. You might not get the same muzzle velocity with each shot, either, since the Spyder Victor is not the most consistent gun. With about every 200 shots you fire, the Victor will chop some paint off in the chamber, but this might not happen with certain brands of paintballs.

Generally-speaking, the Spyder Victor tends to work for at least several years without much maintenance required. As far as maintenance goes, the biggest task you will have is making sure you clean the gun after each use and keeping it routinely oiled. O-rings will need replacing from time-to-time since they leak after some wear-and-tear. Also, most .68 caliber paintballs work just fine with the Victor. Since the Spyder Victor has a tendency to chop paint, you might want to consider spending the extra money on higher quality paintballs, as this will cut down on the chopping.

One of the most common issues you might come up against at some point is re-cocking. If the gun won’t re-cock and you’ve already cleaned the marker, replaced the O-ring, and lubed it up, you will need to check the striker/hammer O-ring to make sure you have the red one. If that’s not the issue, check the reg and spring to make sure that they are both broken in and that the bolt is right-side-up.

One of the best aspects of the Spyder Victor is that it makes for a great project gun, allowing you to customize it to best fit your needs. If you slap an inexpensive CO2 tank or HPA, you can maximize the Spyder Victor’s performance. If you so desire, you can add an electronic trigger frame, a better barrel kit, customized grips, and higher-end bolts. You can swap out standard Spyder parts for parts made by other manufacturers or stick with Spyder. In fact, Spyder sells a lot of upgraded accessories for lower prices than what you might find elsewhere, making the Victor both easy and affordable to upgrade and customize.

The Spyder Victor is not the most accurate paintball gun on the market, and it has several common (but usually very fixable) issues. If you are looking for high-powered accuracy and are an experienced shooter, you might want to get a higher-end marker. However, for the price, you won’t find too many better starter markers. The Victor is ideal for anyone who is just starting out and needs the practice to get their firing rate up-to-speed. It’s also a good gun for those who want to start learning how to customize their paintball guns. If you would like to look into other semi-automatic paintball marker options, take a look at our suggestions for best semi-auto paintball guns!