The Tippmann TMC is the budget mag fed paintball gun that all beginners and intermediate paintballers should consider. The TMC stands out amongst its competition as a sturdy, reliable, and comfortable paintball gun. For starters, the TMC earns the Tippmann seal as a high-quality product. The magazine is very well built and is amongst the cheapest in its class. As mag fed guns have been taking off, many competitors have been introduced in the market. See why this paintball marker stands out in this Tippmann TMC review. 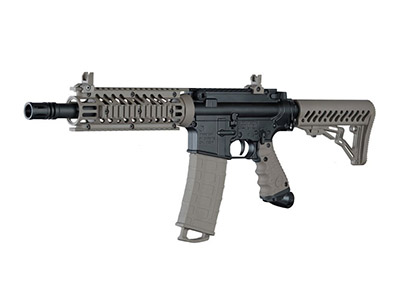 The Tippmann TMC is a mag fed version of the Tippmann Cronus, a wildly popular entry level. Since its release in late 2016, the TMC has been a rave hit amongst beginners and intermediate paintball enthusiasts. We actually consider it one of the best mag fed paintball guns on the market.

First off, the TMC has some impressive features:

TMC is going for about $200, which is excellent value for a gun of this quality and make.

Veteran shooters will have no problems shooting out to 200 yards.

The TMC has a light feel, and it is very maneuverable. Handling the TMC is a breeze because of the lightweight body and adjustable stock. The stock has four different positions that players can use. The TMC is also hoseless making handling easier than if there was an external hose on the gun.

Because of the high-pressure system, the TMC has a strong kick and sound. Compared to other paintball guns of this pressure, the TMC is not overly worse or better than its competitors. In fact, the extra girth in the body helps the TMC reduce some kick.

Veteran enthusiasts will have no issue adjusting to the TMC’s recoil or sound. However, new paintball players may notice the gun’s kick and heavy shot when first getting used to the gun. If you are brand new to the world of paintball, we suggest you take some time to get used to the gun before heading out to play with it.

All paintball guns require routine maintenance and cleaning, but you may find that the TMC requires slightly less maintenance than other competitors. The reliability comes from the sturdy design and quality of Tippmann guns.

Further, for regular maintenance of the Tippmann TMC make sure to wipe off all dirt and mud from the gun, as soon as it gets dirty. Having a clean cloth during matches will be useful in case you trip into mud or drop the gun. Also, use oil meant for cleaning and maintaining paintball guns only. Wrong types of oil can destroy the O-rings inside the gun. Lastly, wipe down all excess oil, paint, and debris off of your gun. Wiping down your gun is especially crucial as excess oil, paint, and consequently, dirt can cause problems with the gun.

The Tippmann TMC is highly customizable. The barrel can be upgraded to improve accuracy and range. For example, we added a 16” barrel to the TMC, and we have found that it is much more accurate. Further, there is space to attach weavers or Picatinny rail attachments. Additional sights, lasers, and scopes can also be added to the TMC.

Overall, the TMC is an excellent gun for beginners wanting to break into a mag fed gun.

The TMC is versatile, sturdy, and comfortable to use. The price is an excellent value for the build quality that the TMC offers. The ergonomics and feel of the gun during play are top notch, and you will experience very few jams and paintball bursts within the gun. The few issues with the TMC are its recoil kick, shot sound, and the first strike paintball incompatibility.

However, with all things considered the TMC provides excellent value at the intermediary and beginner levels. The TMC stands out as a leader amongst its competition within its price range.

What would you like to add to our Tippmann TMC review? Tell us in the comments!